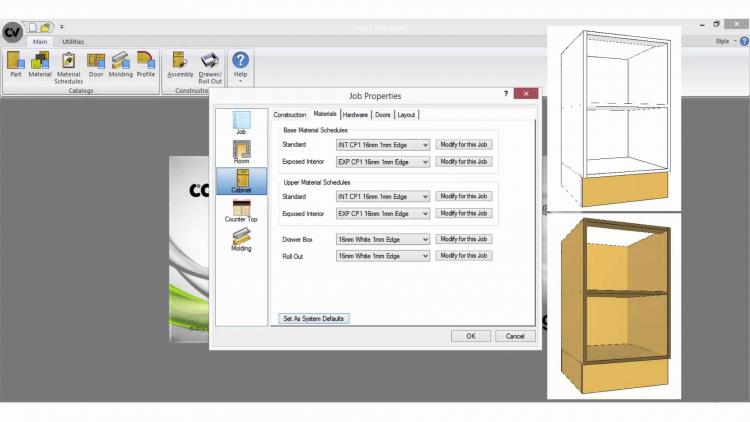 The cabinet manufacturing industry engine is fueled by a class of software I'll call Cabinet Design Software, a sub-class of CADM ( Computer Aided Design and Manufacturing ) software.  This is not to be confused with Kitchen Design Software but frequently is anyhow.  The focus of cabinet design software revolves around the manufacturing processes of custom built and production built cabinets such as design, materials purchasing, sales, engineering, manufacturing, and installation. Kitchen design software, on the other hand, is used mostly in the 'off-the-shelf' kitchen cabinet business for laying out, designing and graphically illustrating room designs.

In this article, I'll relate my thoughts about the state of cabinet manufacturing as it relates to cabinet design software with a particular emphasis on three of the industry's big players, Cabnetware, Cabinet Vision and Mozaik.

Before I get too far along, let's do a brief replay and review of the last 25 years of the featured companies in this article.  Back in 1995, only Cabnetware and Cabinet Vision were the two big players in the industry.  Around 1999, Cabinet Vision was sold to what was to become Planit Software in Tuscaloosa Alabama.  The 'architect' of Cabinet Vision, Roger Taylor went to work for Planit Software as CEO and President of Planit.  A couple of years later Planit bought Cabnetware which was then based out of Woodland, California.  Planit owned the two big players in the cabinet design software industry.

Sometime around 2003, Roger Taylor stepped down as CEO of and left software development altogether.  However, in 2008, Taylor started another software development company called Mozaik Software.  After 4 years in development, the first version of Mozaik was unveiled at the 2012 IWF Show in Atlanta.  It was only a year earlier in 2011 that a European company called Vero Software acquired Planit Software.  Vero was in the CAD software business and serves several industry verticals.  The acquisition of Planit by Vero, I believe, is testament to the maturity, marketability and stability of Planit's products.

Although I can't verify the dates of this decision, it appears that around 2012 Vero Software began making plans to shelve the Cabnetware line as Cabinet Vision was the superior product from a software architecture perspective.  It was announced that sales of Cabnetware would cease as of 2016 and support plans would end and expire on April, 2017.  It's hard to say what the real numbers are but its safe to say that thousands of Cabnetware customers are left without a support security blanket for the software they've come to rely on and depend on for their livelihood.

Some of the CV Skeptics are wrestling with finding enough information to make an informed decision as to which direction they'll go with the decision to stay with Cabnetware or migrate to Cabinet Vision or perhaps go another direction.  This is a good place to introduce Mozaik.  Mozaik, in my humble opinion, is now a viable alternative to Cabinet Vision and I'll try to explain why I think that's true.  I'll try to break up my explaination into some meaningful chunks which would help me make a decision to go with Cabinet Vision or Mozaik or just stay with Cabnetware.

The problem of support

Like Cabnetware, Cabinet Vision's support model has always been 'pay for play'.  Although this support model seems to work well for those who are used to such a support model, the down side is that its quite expensive and not metered.  In other words, Cabinet Vision's 'unlimited' support is an annual cost to you.  If you think like an accountant as I shamefully do from time to time, and if you don't take advantage of any support in any given month, you simply lose the money you spend for that month or for that year as the case may be.  In these times of Open Source software and free software, support for those products is also brought out in a more generous fashion.  It's my wish and hope that Cabinet Vision changes its support model to some tiered support and metered support.

Mozaik, I believe, has taken a lesson from the Silicon Valley software entrepreneurs.  Their support plan is unlimited and free.  I've done the math about 6 different ways.  I gotta give Mozaik the gold star for their support model.

The problem of marketing

So why am I bringing marketing into my article?  I think a company's marketing philosophy and business philosophy are manifest in its marketing practices.  In Vero's case, all I know about Vero and their direction with Cabinet Vision is gleaned from what I can find on their website which really isn't that much, in my opinion.

As I try to make a decision about which product I'm going to pick for my cabinet shop, I want to learn as much about the product before I buy.  And while I can download a free copy of Cabinet Vision for a 30 day trial period, the trial version doesn't have all the features I might want for my business.  I can't introduce new custom cabinet types into my catalog of cabinets, for example.  I can't export reports or create custom reports.  Consequently, I have to make a decision based on only a sample of the features I ultimately might want to purchase.   This marketing and sales model ultimately boils down to the encounter between the Cabinet Vision salesperson and myself.  That means I have to make my buy decision based solely on the information the saleperson delivers to me in our series of sales presentations.   As a cabinet shop owner who is about to make a major decision about the operations of my business, I would like to have as many sources of input about my decision to purchase.

On the positive side, though, I gotta hand it to Vero for letting me kick the proverbial tires for a month.  Mozaik falls short here.  They have no free 'test drive' for me to try out.  Perhaps after reading this, they may reconsider and offer a 30 day trial period.  In my opinion, Mozaik has nothing to lose with such an offer and everything to gain.  A lot of software vendors offer 30 day trial downloads and there isn't really any downside for letting potential buyers try the product before they buy.

The problem of migrating from Cabnetware

Cabnetware, Cabinet Vision and Mozaik have all taken different approaches to the solving similar problems in cabinet shops.  Estimating, purchasing materials, job costing, job estimating, optimizing materials, reporting, cutlists, materials list, graphically illustrating rooms and views and screen to machine CNC instruction sets are all common areas of focus that these programs accomplish with incredible ease and dexterity.  And each program is unique in its presentation and its architecture and work flow.  Consequently, the habits learned from years of Cabnetware use can make for an awkward transition to Cabinet Vision or Mozaik.  While thick training manuals could be written on this topic of migrating from Cabnetware, I simply want to make the point that there are probably more similarities that would tend to help guide you through the migration process than act as roadblocks on your migration path.

One other point I'd like to make is I'd like to encourage you to simply try stuff out.  First learn how to undo to avoid those Uh-Oh moments and then go at it hard and often.  Repetition is your best teacher, in my opinion.  You became good at Cabnetware because you've used it many times.  And you'll become proficient using your new software too.

As it is with any new thing, figuring out how to use that new thing and figuring out how to best use that new thing can be a challenge unto itself.  While learning resources do exist on the web for Cabinet Vision and Mozaik, the resources aren't plentiful nor are they well organized or easy to find.  While there seems to be a good number of Cabinet Vision videos available on YouTube, its not easy to find the most current video relating to the most current releases of Cabinet Vision.  Consequently, it could be a process of trial and error to simply locate a video pertaining to your particular area of interest.

Mozaik has a similar dilemma.  There just aren't enough videos to cover all the scenarios, questions, comments and concerns and learning opportunities of users and prospective buyers.   Although I can't verify this because I'm not a current subscriber to Mozaik, it appears that Mozaik's video library is accessible only to subscribers.  While there may be a good business decision for this pay-to-view practice, it doesn't make much sense from my perspective.  It seems to me that granting broad access to these videos would only stand to boost sales.

The problem of cost

As a professional software engineer, I've had to buy and use a lot of specialized software and software add-ons over the years.  I get paid for writing software so I get all the economics of software development.  However, this is the most expensive class of software I've ever had the pleasure to purchase.  At somewhere between $6000 to $10,000 per person, it soon becomes easy to lose track of all the zeros.

Cabinet Vision, on the other hand, offers only the same licensing model which they've used since it was first introduced.  Consequently, the cost of ownership is quite high at the start.  And could be considered to some as a non-starter barrier to entry by comparison to Mozaik.

Summing it all up

I hope this article has helped you make an informed decision about what the next generation of cabinet design software will look like in your shop.  Like most software buying decisions, it's a multi-faceted decision.  Unfortunately, there aren't any 'apples-to-apples' comparisons.  Its more like 'fruit-to-fruit'.  But the good news is there aren't any wrong answers.

If I can help you make a decision about which of these makes the most sense in your shop, send me an email at bchezem@craftsmanengineering.com.

Like the software engineers who created Cabnetware, Cabinet Vision and Mozaik, I had a unique career path which intersects the software engineering industry and the cabinet manufacturing industry.  I opened my first cabinet shop in Grass Valley, California using pencil, paper, tape measure and story poles to layout rooms and create cut lists.  Several years later, I was hired by CableData in the company's own cabinet shop to run their milling department.  It was at CableData where I first transitioned from commercial cabinets and furniture manufacturing to software engineering.  Over the next 30 years, I engineered software for scores of industries including banking, the State of California, student loans and grants, higher education, the Small Business Administration, and cable television.  On the cabinet manufacturing side, I owned and operated Craftsman Woodworks in Rancho Cordova.  I also worked for several large cabinet shops in Northern California as a Cabinet Design Engineer, Project Manager and Commercial Estimator.  I was proficient with Cabnetware but that's in the rear view mirror.  Now, I'm learning new things about Cabinet Vision every day.

Did you say 64-bit Cabinet Vision?
Why I don't consider labor when estimating with Cabinet Vision
The Difference Between an Estimate, Quote, Bid, and Proposal
Using Sketchup for Cabinet Vision
Who Shot Adobe Flash?
What's your CVQ? ( Cabinet Vision Quotient )
Cabinet Vision Curious
Tools of the trade - From storey poles and drafting tables to lasers and Cabinet Vision
We're building relationships with some really great people in the cabinet manufacturing industry
Is it time for your shop to migrate from Cabnetware to Cabinet Vision or Mozaik